Sometimes a band surprises you, and an album even more, by proving that is has to grow on you. The first time I played Aïnulindalë’s Nevrast, I was not sure what to do with it. It was on my review list, but I don’t like posting a review if I am not fully behind it. With that, I postponed the review for a while, and played the record whenever I thought of it. The last week before writing this review, it’s gotten more playtime than before, because I felt I could not postpone it any longer. And that proved to be worthwhile. [acfw id=2] 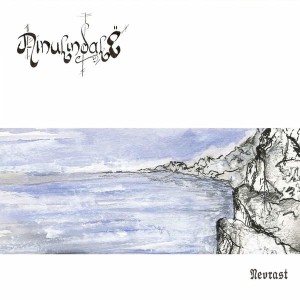 This is not the average folk album, nor is it a real prog or rock album, but what Aïnulindalë presents is everything but bad. Mainly driven by acoustic guitar, the album contains 8 tracks inspired by the works of J.R.R. Tolkien. The writer, who’s work have been done a slight injustice by the overly pompous 6 movies created based on his masterpieces The Lord of the Rings and The Hobbit, has certainly inspired a soundtrack here. Centred around the acoustic guitar of Thomas Reybard, the band plays folk from Middle Earth. Sometimes slow and mesmerising, sometimes building sad, and always melodic. The guitar paves the way, often accompanied by an acoustic bass, for soft, sometimes almost spoken vocals by Reybard, and his vocal companion Alice Jean. When the voices are absent, (real!) strings, trombone and percussion fill in the atmosphere. Especially The Parting, Namarië and the title track have an almost cinematic sound to them – close your eyes and see the world of Tolkien appear in front of you.

The closing track Distant Land led one friend to remark that ‘this is Camel, with acoustic guitars added’. I think the band can take that as a compliment.

This is an album not for those who seek guitar driven rock or walls of keyboard, but those in search of a soundtrack to their fairy tale and traveling fantasies will find this worthwhile.