On the day that guitarist and keyboardist Stephen Speelman asked us whether it is true he looked like Yanni in the 90’s, it’s time for me to fill ina promise: the promise to review the latest album of his band  Unified Past. The band I had heard about long ago, but I never really listened to their music until this album came out. Mainly due to the fact that they are classified as progressive metal, and I’ve not been interested in metal for a number of years. That changes every couple of years, and so also now. 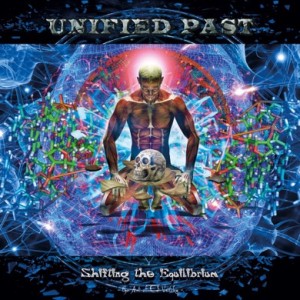 Unified Past – Shifting the Equilibrium – cover-art by Ed Unitsky

On this album, Speelman is accompanied by bass player Dave Mickelson, who’s rattling strings might have been a bit more up front in the mix, drummer Victor Tassone  and vocalist Phil Naro. The latter two I also know from projects like Andy John Bradford’s Ocean’s 5 and Corvus Stone, which are musically quite different from Unified Past.[acfw id=2]

The music of Unified Past certainly isn’t the kind of sky rocketing freak metal as we find for example on the albums of bands like Dream Theater in the last 10-15 years. Instead it’s more a mix of 90’s and 00’s metal, with the keyboards and guitar tunes playing an important role – making it all quite nicely bombastic at times.

Instrumentally, the band is as capable as vocal chameleon Phil Naro is on vocals (check his other projects and random Youtube videos to see what I mean), and as tight as 1980s hardrock skinnies. I haven’t tried to count, but I doubt there is a lot of 4/4 beat going on on this album, tempos change every time, and it’s hard to spot mistakes.

My favourite track is impossible to identify, every track on the album has its own strengths. I love the keyboards on Smile, despite not being a big keyboard fan, and the vocals on Edged In Stone give me goose bumps. Peace Remains in this World could’ve been a hard rock classic from the 80s yet doesn’t sound dated at all, and Deviation from a Theme is a wonderfully built up instrumental – this time not going from small to big, but rather the other way round – with a shiver inducing guitar solo near the end.

The only issue I may have with the album is that the sound is quite dense, a little more dynamics would’ve been nice – even if this is classified as metal (the dynamic range meter gave a level of 6 as explanation)

Definitely recommended – and rock enough to also appeal to those who are not into full on metal.