I missed the live gig of 3RDegree at ‘t Blok in The Netherlands earlier this year, unfortunately. Would have loved to finally meet Robert James Pashman, who contacted me at ProgArchives in March 2008, asking if his band qualified for inclusion in the site. At the time, the band just released Narrow-Caster, their third album, and the first one since 1995 at the time. Since then, they released two more – The Long Division, which I missed at the time (2012) and this years Ones & Zeros: Vol. I, which is the subject of this review. [acfw id=2] 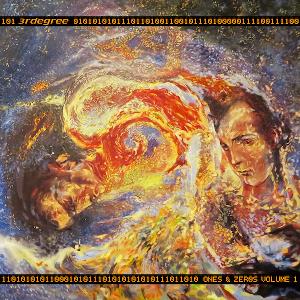 First thing I noticed when listening to this album, and refreshing my memories of the initial contact with Robert, is that the common musical interests we had at the time (Rush and Marillion for example) are not the main influence in their music. Instead, many elements from progressive rock since the early 70s till today can be heard on this album, in an original mix defined by 3RDegree. I’ll leave it up to the listener to make up his mind about what comes from where. I myself spotted hints of Gabriel era Genesis (wonderful keyboard work on Circuit Court and More Life), as well as bits of Rush (the bass is not at all a copy of Geddy, but has the same impact on the music), vocal arrangements akin to those of Echolyn (and and one track (Life) that has a hint of 70s singer/songwriter material, not unlike the older works of one David Bowie.

The album, by means of advertisements in between the songs, and the very appealing voice of George Dobbs,  tells the story of Valhalla Biotech, a company that promises people the way to a longer life by means of technology – the way to ‘a longer you, a better you‘, in the not too distant future. People get biometric clothing, digital glasses, possibly even implants – and if they can’t pay their regular fees, these things will be disabled for a certain amount of time (presumably until payment is made). Throughout the album, the flaws of this system, and real failure leading to death of people become apparent. With the digital, bio and gen technology developments of recent years, and the money hunger of modern multi nationals in mind, not a very far fetched scenario. A scenario that 3RDegree manages to capture in lyrics as well as music. The gloom of this future is expressed in the music, that is sometimes uplifting (reflecting Valhalla’s commercial voice), to gloomy (The Best and Brightest, about the rat race between countries and companies), and culminating in the right out frightening We Regret to Inform You, which’ ever darker and mostly instrumental sections are interleaved by ever more worrying computer voice messages about the status of someone’s father in treatment. The closing message leaves the listener with goose bumps: ‘We regret to inform you, your father has been.. deleted’.

In summary – I love the (scary) story line, the bass and drums, the keyboards (with three keyboard players on board they’d better be good), the guitar leads and the vocal arrangements. Not much to dislike there, unless you are not into (progressive) rock at all, or if you don’t like occasional folk like acoustic guitar and vocal arrangements. Highly recommended.