Classically trained (but not in guitar) guitarist Colin Tench is about 132 years old now. He was there when George Martin was conceived, errm, conceived The Beatles… Having learned to play the instrument at 22, after a 110 years he can barely be distinguished from the ones who started at age 5. 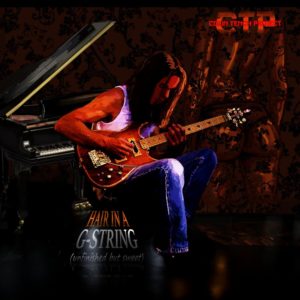 This is the point where I could say ‘All jokes aside’ and continue, but with this album I’m afraid that’s very hard, as there is a lot to laugh about, in between 80 minutes of seriously good and well performed music. Good music, in the form of an epic title piece, that is divided into separate 4 parts, and runs about 30 minutes in total. The piece has a recurring musical theme, that is played in so many different ways it takes a proper listen to spot it, and which invisible makes it into a coherent piece. Makes coherent indeed, because this is not music for casual listeners. They will hear loose bits and pieces, that only connect when you sit down for it. It starts in Part 1 with an acoustic guitar and some synths, changes to electric guitar and piano, but just as easily goes Santana style lating in the second half of Part 2. In Part 3, avant garde and Zappa-esque things happen (also lyrically), while in Part 4 we are treated to a great progressive rock piece, with a comedy parade performed by vocalists Peter Jones and Phil Naro. [acfw id=2]

Having the theme, and Colin’s way of composing make that this works. He doesn’t just lay down a chord pattern. He thinks (and talks) in melodies and every note has to be at the right spot and of the right length – like the way classical composers did. I know first hand – having contributed a whopping 2.30 minutes of fretless bass to this piece. I have some bass notes left over that were rejected for being in the wrong place. I think the same applies to Petri Lindström (Corvus Stone) who contributed most of the other bass parts on the album, and Stephen Speelman (Unified Past) who makes a short but stunning appearance right in the middle of Part 2.

In between the four parts, 8 other tracks are placed, all of which are delicately crafted compositions, and as varied as the main suite.

Can’t see It Any Other Way, is almost a prog rocker, with sufficient ‘funny noises’ and percussion to make it into something that attracts attention. The big star here is singer Phil Naro (Unified Past). La Palo Desperado and The Mad Yeti show Colin Tench’s skills on acoustic guitar, and so does Dnieper Summer Day.

On The Sad Brazilian, a horror movie like keyboard riff opens, after which the track develops into a nice mix of melodic electric guitar rock and orchestra.

That orchestra, which lives in Gordo Bennett’s (GorMusik)basement also happens on Lisa Waltzes back in with no G-string, which is a ‘redesign’ of the last bit of Corvus Stone’s Moaning Lisa. In that piece, originally German Vergara sings ‘mi chitarra canta’, on this version Colin let’s his guitar sing for real. He does it again, acoustically on Lisa’s Entrance Unplugged, a redo of the same tracks intro minutes, with additional beautiful flute work by Ian Beabout. Oh, and there’s the bonus track of course, a full orchestra rendition by Gordo Bennett of the yet another part of Moaning Lisa.

Something Old, Something New, Something Borrowed Something Screwed was always one of my favourite demos of CTP, and now it’s been remixed and slightly changed. Colin’s ode to the old prog bands, by musically making it exactly what the title suggests.

The love it or hate it track on the album is likely A Beautiful Feeling. A bit of an odd beast, being a proper rock ballad, but with a feeling to it that made me nick name it ‘The love boat’. It does have that feeling, just listen and you’ll understand. At the same time, it has something very appealing, maybe once again because of Phil Naro’s great vocals.

And of course, like all Colin Tench’s works, the artwork on this album (digital release available September 30th, CD in november 2016) is done by the brilliant ‘pintora’ Sonia Mota (Chipmunk). To honour her (we think, but he won’t admit it) Peter Jones contributed the 23 second Part 4b Redux to the album, which has the Chipmunks singing.

That same Peter Jones provided the vocals for my forever favourite track on this album And So, Today. Not favourite because it’s the most complex or most progressive, but because it is a very fitting and well executed tribute to all the musicians who left earthly life in the year before this album was released. Every time I hear the line “Our wild eyed boy is stardust…” I get goosebumps and the hair on my arms stands upright.

Overall, this is an album I find hard to describe. The music on this one was all mainly composed by Colin Tench himself, although the contributing musicians got a lot of freedom to fill their parts. This makes it different from Colin’s main project, Corvus Stone, which has tracks composed based on ideas by different band members. Some may find it more coherent because of this. Either way, like Zappa liked doing new things, as did Yes and Genesis in the early 70s, and The Beatles in the 60s, Colin aimed at doing something not done by other bands. And I think he succeeded. Music that sounds loose and playful, yet every note was perfectly planned. As Peter Jones sings in part 3, it’s Gooditygooditygood. Highly recommended!