Twenty years ago, I could not have imagined having made as many friends through Facebook and other social media as I did in the past 18 months. By posting album reviews, and 9 months ago adding an internet radio show as well. It put me in contact with people that like the same music, share the same dreams and to some extend have the same fears. Fears that include losing our freedom and privacy to the net, while being (un)consciously aware of the fact that it is us, ourselves, giving up these things by being active on the net. 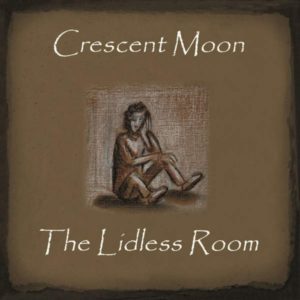 Exactly those fears, and Kafka’s book For dem Gesetz (Before the Law) are what inspired four members of a single family into creating an album called The Lidless Room, and release it under the name Crescent Moon. Brother’s Frank and Eric Peters, and Frank’s 15 year old twin sons Bas and Tim managed to come up with a great concept album around this theme. [acfw id=2]

The album tells the story of a man, sitting before a guarded gate, who cannot pass
until the moment he gets rid of his VR glasses and smart phone. His mental road from arriving there until realising that is captured in music that sometimes resembles that of 70’s Pink Floyd (Roger Waters certainly was an influence), but is by no means a copy of that. Especially the vocals on Obsolete Man remind me of Eclipse, from Dark Side of the Moon).
With outstanding tracks like Aphids and Ants (melody written by Bas at age 13), The Lidless Room itself and the closing instrumental Through the Gate, the foursome proves to be more than average musical family.
The music is atmospheric, with the keyboards often carrying the rest of the band through the instrumentals.

To add to their credits, the band has taken a very professional approach to creating this album. They built their own studio at home, played, mixed and produced everything themselves, and have a great eye for detail. Proof of the latter: One part of the story tells about the man sitting in front of the gate remembering playing his first LP. Sure enough, the back cover of the CD nicely divides the 11 tracks over Side 1 and Side 2 in reference to that.

Happy to know these musicians, by their music and their regular attendance to the chat of my radio show. But even without knowing them that well, this album deserves to be qualified as highly recommended. Crescent Moon delivers progressive rock inspired by the classics, without becoming a copy of one of the classic era bands.